skip to main | skip to sidebar

An excellent article in the Independent today about the rather authoritarian nature of the current government. Perhaps there's hope yet on ID cards not getting through before the next election - surely between the Conservatives, the Liberals and the Labour rebels it should be possible to defeat this proposal.
Posted by Thomas B at 10:14 am 1 comment:

Another big man dies in Ireland

Where as Charles Haughey was controversial, so was Monsignour Denis Faul who died today. I was always aware of him as a man who never shied from speaking his mind, and who was willing to condemn unequivocally the violence on both sides of the Northern Irish divide.

By the way, the Hutton and Shenfield Choral Society will be performing Mozart's Requiem and some Bruckner Motets on July 8th in Chelmsford Cathedral. Come along and support the arts.
Posted by Thomas B at 10:49 pm No comments:

Why I am now opposed to the EU constitution

I'm not a euro sceptic. I'm not opposed to the European Union, and I do think the EU has an important role to play in the future development. Until recently, I would described myself as pro-Europe.

During the second referendum on the Nice treaty in Ireland, I was active in the Yes camp - to the extent that I made the case in discussion with friends and canvassed on the door steps in my hometown to get people to vote Yes to the treaty. This despite the fact I didn't even have a vote. I did this despite the No vote in the first referendum, because of my belief that the real problem first time out was that the Yes voters stayed home. In that sense, my decision was vindicated, as the actual number of No votes cast barely moved (529,478 in the first referendum as opposed to 534,887 in the second, yet the result went from 55% - 45 % against to 63 % - 37% in favour of the treaty). The results proved that the claims of euro sceptic groups like the Bruges Group that the original result showed "the people of Ireland have unequivably rejected the Nice Treaty"[sic] was plain wrong.

Things have changed in the intervening four years since the referendum - I've moved to England, and the EU Constitution was introduced and rejected by the Dutch and the French in referenda. The British, who were promised a referendum by Tony Blair, and the Irish, who have to a referendum under the terms of their own constitutions, haven't had a chance to vote. I was always concerned about the concept of a constitution - that's the sort of things states have, and I don't want the EU to become a Federal State. The Constitution was almost impossible to read, as opposed to the Irish or US Constitutions. Now, we have a constitution, rather surprisingly carved out at the end of the Irish presidency with much backslapping amongst the Irish media at the role Bertie Ahern had had in brokering a compromise. Despite that, the referendum was well beaten in the two countries already mentioned, and there they don't have the excuse that Ireland had with Nice in 2001 - namely a low turnout.

After the "defeat" of Nice in Ireland in 2001, Romano Prodi said that the EU would listen and reflect on what the Irish voters had said. This has turned out to be complete hogwash - despite the votes against the EU Constitution, EU Ministers seem to be determined to push ahead with it. There is a story from this week on the BBC News site in which the Prime Minister is quoted as saying it would be wrong to rule out the return of the Treaty.

I can no longer continue to support an institution with senior officials who think democracy is something inconvenient and to be ignored when the people decide they want to slow things down. Cameron is absolutely right - this is an ex Constitution. Bereft of life, it is no more. And it is time for the EU leadership to accept that fact.

The announcement over the weekend that John Reid is considering introducing an equivalent of Megan's Law into the UK smacks to me of political opportunism, and an attempt to divert attention from other issues within the home office - including the fact that the outrage caused by relatively lenient sentences awarded to a man who kidnapped a three year old were in fact the result of New Labour drawing up legislation and not the fault of the judge.

As I see it, the main issue involved in releasing the information is that it will stir up lynch mobs of the kind witnessed in Portsmouth a few years ago. Quite apart from the issue of vigilantism, this is a disturbing thought as during those riots a pediatrician was attacked by morons who couldn't tell the difference between a child doctor and a child molestor. On top of that, the wrong individuals were identified in a number of cases and attacked. I saw some archive footage over the weekend of hand written banners were the word paedophile was misspelt.

Citizens are entitled to the protection of the state if they are threatened - this is true regardless of what they may or may not have done in the past. In particular, if they have committed a crime and have served their sentence, it is not acceptable for individuals to take it upon themselves to add to their punishment. If John Reid were to publish the details of paedophiles released from prison, he would almost certainly be incurring additional costs involved with protecting those people from vigilantism.

Better changes would be to give the courts the authority to extend the sentence of paedophiles if there is a significant risk they may strike again. There is lots of evidence that paedophilia is compulsive (a lesson that tragically the Catholic Church learned the hard way) and if you have already committed the offence, it seems reasonable to want to keep you in prison until you are no longer a risk to other children.

One suspects however, that this bill is less about protecting children and more about whipping tabloid hysteria so that, combined with the World Cup, the public will forget about the complete mess they've made of running the Home Office.
Posted by Thomas B at 2:09 pm No comments:

This amused me - look at the head line and the Google Ads. 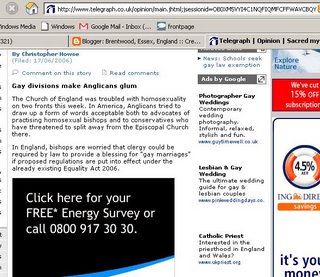 Death of "the Boss"

The news of Charles Haughey's death reminded me how much I've moved away from Irish politics since my move here. I learnt of the news through the ILUG IRC #linux channel. During the week, one friend remarked "you're getting more British with every passing day". I'm not sure if it was meant as a compliment or not, but I really don't care.

But back to "the Boss". Ever since a friend lent me the Scrap Saturday tapes I'll always think of him going "Meara" at an unfortunate PJ Meara (yes - I know its satire). There's little doubt that he was a flawed politician, and frequently the target of the Irish left. Yet during his career he was responsible for a number of changes that have shaped modern Ireland - including the abolition of the death penalty, patronage of the arts and the development of Temple Bar and the Irish Financial Services Centre in Dublin.
Posted by Thomas B at 10:52 pm No comments:

This time last year I was packing up in our old flat before heading off to Singapore to get married. A lot has happened since - new job, the arrival of our gorgeous little boy. One thing that I still remember about the build up to the wedding was not handling the heat particularly well - the day before the wedding I had a terrible heat induced headache. Today has also been very hot, and right now I'm sitting in the back garden enjoying it.

It was supposed to be Baby's first world cup - we'd bought an outfit for him, but the little darling decided to go to sleep instead. It's probably the result of a morning when he was left along with Daddy while Mummy went to Tesco to do the shopping (the original plan had been Sainsbury's, but being a world cup match day I gather the car park was absolutely insane. E got to Tesco's in Romford only to find that the queue to get in was rather long).

Which rather nicely brings me to a very important point - there is really nothing that can match the feeling of spending the morning with your son on your knee and having him smiling at you. As I wrote that last sentence, baby showed his sense of irony and the little sweet heart decided to puke. Luckily he missed the laptop. And me for once!
Posted by Thomas B at 7:26 pm No comments:

how stupid can FIFA be?

In a letter to the Irish Football Association, Fifa insisted its officials should not be expected to determine whether a player fulfilled eligibility requirements on the basis of the Belfast Agreement.

"The fact that a player holds an Irish Republic passport does not demonstrate conclusively that he or she is eligible to play for Northern Ireland," the letter to IFA chief executive Howard Wells read.

Neither does a British passport you twits.

Maybe I'm just turning into a slightly grumpy old man, but I'm feeling a little peeved with the passport application process. As I've noted elsewhere, a number of major changes have taken part in my life over the last couple of years, and the two changes that are relevant to this story are my arriving in Brentwood from Ireland at the tail end of 2004 and the more recent arrival of my wee fella in Harold Wood Hospital on Good Friday.

In order to facilitate his visiting grandparents in foreign parts, he needs a passport. And the most wonderful woman in the world (aka my wife) was talking about going back to foreign parts with him in a few weeks.

This gives me a minor headache, as it appears that I need someone to countersign the passport form. This someone must be of standing within the community and have known me for two years. For added values, the someone must be a UK resident and be a UK or Irish citizen (this last one actually gets me my solution).

Of course, I know plenty of people who are "of standing" for a number of years but most of them are in Ireland and the ones who aren't are relations of mine. Luckily there's an old school friend who is Irish and counts, so he can sign the form, because otherwise I was going to have to ring up an old priest friend of my mothers to get the forms signed. The system clearly wasn't designed to facilitate the process for ex-pats who have only relatively recently returned home.

And I just described myself as an expat for the last 25 years of my life. A Thiarna déan trócaire.
Posted by Thomas B at 12:55 am No comments:

To Pron and Sinead on the safe arrival of baby Eoin Tadhg at 9:31 in Dublin this morning
Posted by Thomas B at 12:36 am No comments:

Thomas B
38 years old, used to live in Brentwood and now living in Singapore. Born in England and grew up near Dublin.